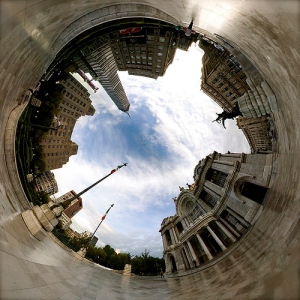 “How blessed is the man who does not walk in the counsel of the wicked…” -Psm. 1.1a

“You shall charge the sons of Israel, that they bring you clear oil of beaten olives for the light, to make a lamp burn continually.” -Ex. 27.20

It is one thing to declare in a church meeting that the Lord has become our Counselor. It is quite another thing to dwell in the clear air of His heavenly sanctuary, and to surrender our lives- lock, stock, and barrel- to the counsel He gives us in real life. Are we naive enough to believe that walking in the counsel of the wicked is limited to practicing Satanism, engaging in prostitution and drug activity, or giving ourselves to some other blatantly dark thing?

If we are not pressing past the voices that surround us, and into the vital counsel of God Himself, then we are completely vulnerable candidates for walking in the counsel of the wicked. We may speak religiously, but we will not be free from the spirit of this age which rules the hearts of men, binding them in lust, fear, intimidation, anxiety, and self-centeredness. The nature and condition of a man’s life when he is not in a religious meeting is the statement of where he really is in God.

The seven-branched Levitical “lampstand” in the tabernacle of Moses was fueled by “clear oil of beaten olives for the light.” At the command of the Lord, the oil which fed the flame was to be clear, beaten from olives, “to make a lamp burn continually.” The Lord has always desired that His people, who are typified by a “lampstand” in the Revelation to John, would bear a flame of fullness that was fit to burn continually.

Instead, we have settled for soulish outbursts of religiosity once or twice a week in services, but have been unwilling to go through the heat and pounding that the Levitical lampstand was required to endure for its formation. Only a rightly fashioned lampstand that is fed by clear oil can bear the seven-fold flame that the Lord has desired it to burn with.

We have wanted lives that we can control, that we can own, that never discomfort or challenge us with unpredictable counsel from the Ancient of Days. We participate in a measure of Christian devotion, knowing full well that if we were to surrender to the Lord unreservedly, we would likely be shaken from our stationary spirituality, and called into a more dangerous and risky love than we have ever before known.

We have not been willing for Him to surprise us, to consecrate us, to immerse us in His heart and His ways. We have desired a partial involvement, a limited relationship, and it is something that falls short of covenantal glory. Hence, our flame sputters and fluctuates. It’s choppy, sporadic, and usually dim. We have willingly allowed a tainted oil to go through the lampstand for the feeding of the flame, but the Lord will have no such thing. He requires a clear oil, the oil which He Himself provides, rather than something lesser that we have received from men, or something that we have worked up by our own wisdom. Truthfully, dear saint, what oil are you receiving?

Again, I inquire: We may declare the Lord our Counselor in a church meeting, but who’s counsel are we actually walking in? The bad fruit of wicked counsel is a life of religious striving, moral compromise, mistrust and suspicion, fear, anxiety, and self-absorption. To breathe in the clear air of the Heavenly sanctuary, to break into open communion with the God of Life, is to receive the clear oil into our souls, and to dwell in the counsel of the Almighty.

When we sink our lives into His counsel, we hear the clear word of His astonishing love for us. We hear the clear testimony of His Son. We hear the clear statement of the judgment to come. He reveals Himself to us, and we are rooted and grounded in love, and brought into an awareness of the gravity and seriousness of His eternal purposes. Only this kind of profound union with the Lord can charge a steady and full flame in the house of God, and He would have it no other way. For if He Himself is the Smith of the lampstand, and the Producer of the oil, and the Giver of the flame, then not only does He have vessels and servants, He has co-laborers and friends. He has sons and daughters. “… a bride adorned for the Bridegroom.” (Rev. 21.2b)

Receiving tainted oil, which is allowing the aura and essence of the world to influence our minds and hearts, is the ominous gate to walking in the counsel of the wicked. It results in something less than true communion with God, however innocent that counsel may appear. But to break out of the cobwebs of worldly influence and thought, and into the clear air of God’s holy house, is to be immersed in the counsel of the Lord, which is “righteousness, peace, and joy in the Holy Spirit.” (Rom. 14.17b)

We’ve got to be fiercely desirous of the clear air, saints. The media, Hollywood, and often our co-workers, relatives and neighbors, are wanting to drag us down into the various pits where they have resolved to remain, and which rob them of the Life that His counsel offers us. Don’t be duped by a smile, by wealth, or by a confident attitude. If they are not receiving the “clear oil” of God, they are walking in the counsel of the wicked, and if you don’t break out of the pit you will not have Life sufficient to overcome the lies yourself, much less to provide a gate of deliverance for them. We’ve got to “delight in the law of the Lord,” and give our lives in the place of prayer, worship and fasting, lest we find our “lampstands” filled with tainted oil, and our flames sputtering and fading in the winds of this age.

God is not a God of confusion and disarray. He is sounder and more stable than the foundations of the earth, unchanging and eternal, and He lives in the clear air of Heaven. He has always desired a people who would dwell there with Him, and if you have repented and believed the Gospel of God, you have been raised up into His house through the work of His Son. It’s time to cast the murky oil to the side, be it moral compromise, or simply giving our time and energies to too many seemingly good things, while neglecting the place of face to face counsel from Him.

The hour is here for an ultimate consecration of our hearts to the Lord, and the invitation He is giving us is glorious beyond description. “Now is the day of salvation” from all that has hindered us from the full experience of the clear oil of His Spirit. Isn’t this what you long for? He has made His own “righteousness, peace, and joy” available to us in a radical way through His Son.

And what is the glory that lights upon the believer who breaks out of wicked counsel and into the clear air of the heavenly Tabernacle?

“He will be like a tree firmly planted by streams of water,

Which yields its fruit in its season

And its leaf does not wither;